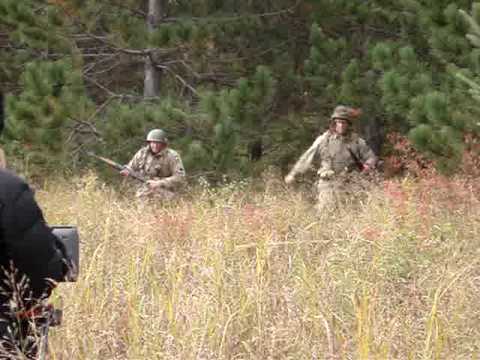 On October 4th, 2009, the Tumblemonster Stunt Team, part of Gleason’s Xtreme Program, traveled to Traxler’s Hunting Preserve in Le Center, Minnesota to provide stunts and action sequences for 185 Media/Traxler’s upcoming feature film “Souvenirs”. The Stunt Team performed squib hits, falls, and two amazing explosion stunts. In this particular scene, Americans are struck by the explosion from a German “Stielhandgranate” or hand grenade. The trailer for 185 Media/Traxler’s upcoming feature film, “Souvenirs” will be released in early November and will be uploaded as soon as it becomes available.

Souvenirs is the first cross-genre family/war movie that uses war stories to explore the themes of war, storytelling and family. It’s about the intensity of war, the challenges of true leadership, and the importance of passing down wisdom through the generations. When a just-returned-home Army soldier, Kyle Vogel, leaves a handwritten letter on the passenger seat of his car, walks into a Minnesota forest alone and removes a pistol from his pocket, we wonder who he is, how he got here and what hes about to do. The rest of the film answers these three questions in a magical way that crosses two continents and multiple time periods. We start by seeing how Kyle was wounded in Iraq. When hes sent to a trauma center, a female lieutenant (Kelly Tripp) catches wind of his penchant for taking the souvenirs of battle. When Tripp asks Kyle why he collects so many objects, he launches into a story about the single most formative day of his youth. On Memorial Day in 1993, when Kyle was just 13, he discovered a beat-up footlocker in a storm cellar at his grandparents Minnesota farmhouse. When presented with the footlocker, Bud Vogel—a veteran of the 82nd Airborne during World War II—refused to talk about the objects inside. Kyle used his persuasive abilities to change his grandfathers mind, however, cajoling Bud into letting him pick three objects for the telling. What follows in Souvenirs are not only Buds tales of battle, but intimate stories of friendship, loss, triumph, regret and acceptance. Over the course of one afternoon on a quiet farmhouse porch—and despite Buds failing short-term memory—we not only flash back to Buds incredible experiences in World War II, but also flash forward to see how Kyles experiences as a Minnesota National Guard Red Bull have mirrored those experiences. After Kyle finishes telling Tripp about the footlocker, he returns for one final mission before his unit is due to be sent home. That mission forces Kyle to make his toughest call as a squad leader. Presented with a moral dilemma of leadership similar to one faced by Bud—whether to spare an individual life or let one person die to potentially save many others—Kyle comes to a full understanding of why his grandfather was so reluctant to share his war stories.
To make matters even more challenging, when Kyle returns from the mission, he learns of Buds death. This combinations of events and experiences threatens to send him into despair, until his commanding officer presents him with a letter Bud wrote to him on that fateful day in 1993 and—due to his failing short-term memory—simply forgot to send. On his way back home to his family in Minnesota, Kyle carries the unopened letter with him. When we resume with Kyle in the forest, we realize that he is actually on his way to Buds grave after
having read this amazing 15-year-old letter. As we hear the words spoken, we witness first-hand the importance of storytelling and the power of gratitude in providing comfort, understanding and redemption.