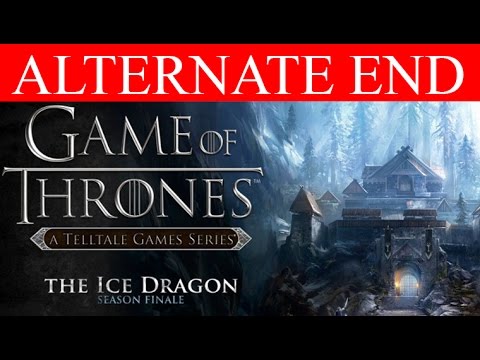 Full Playlist:
I will release the alternate endings shortly.

Game of Thrones is an upcoming episodic graphic adventure based on the A Song of Ice and Fire books and television series, starting in December 2014 for Microsoft Windows, OS X, PlayStation 3, PlayStation 4, Xbox 360 and Xbox One. The game is being developed by Telltale Games in partnership with Ty Corey Franck, the personal assistant of the books’ author George R. R. Martin, who works as the “story consultant”. The game will follow a similar episodic format to other Telltale titles, such as The Walking Dead, The Wolf Among Us, and Tales from the Borderlands, where player choices and actions have significant effects on later story elements across the six-episode arc.

While the game will include settings and characters (including voice work provided by the actors that portray these characters on the television show), Telltale’s game will introduce a yet-seen House Forrester that controls the Ironwood forest in the north of Westeros, from which five members will be playable characters within the game.

Game of Thrones is a point-and-click adventure game, to be released as six episodes.The player will be able to move their character around the world’s environment, interacting with objects and initiating conversation trees with non-player characters. Choices made by the player will have impact on later story elements in future episodes. The game will involve a story that switches between the viewpoints of five different characters.
The game will take place concurrently with the television series, from the end of the third season until just prior to the start of the fifth season. The story will focus on the House Forrester, a family not yet introduced in the television series, but found within the continuity of the books, appearing in A Dance with Dragons. House Forrester is found in the north of Westeros, in a fortress called Ironrath, where they control the valuable Ironwood forest which has attracted rivals to their reign. The game will primarily take place near Ironwood, but will include established locations on both Westeros and Essos continents.

Throughout the game, the player will control one of five members of the Forresters (either a family member or servant), with decisions made by one character affecting the others, and the ultimate fate of the house.Telltale has stated there are thirteen original characters developed for the game, which include (both playable and non-playable characters):
Lord Gregor Forrester, the father of the House and loyal to the Starks.
Lady Elissa Forrester, the matriarch of House Forrestor that vows to prevent the destruction of her family as had fallen to her birth family, House Branfeld.
Rodrik Forrester, the first-born son of the House and its heir, with a prominent military background.
Mira Forrester, the eldest daughter of the House and serving as a handmaiden to Margaery Tyrell
Talia Forrester, the second-eldest daughter, who is gifted with a talented voice.
Ethan Forrester, Talia’s twin, the third-born son, and an academic that was drawn into the War of the Five Kings.
Ryon Forrester, the youngest son of the House.
Asher Forrester, the exiled son of the House that nearly brought it war and since has resided in Essos to leave that past behind.
Maester Ortengryn, loyally serving the House Forrestor after studying at the Citadel and assigned to the family.
Ser Royland Degore, an experienced military leader that serves as the master-at-arms for the House.
Duncan Tuttle, a good friend of Lord Forrestor to which he now serves as the House’s Castellan.
Gared Tuttle, squire to Lord Forrestor and nephew to Duncan.
Malcolm Branfeld, brother of Lady Forrestor and, with her, the only surviving members of House Branfeld.
The game will also include characters from the show, with voice work performed by the show’s actors, including: Cersei Lannister (Lena Heady), Tyrion Lannister (Peter Dinklage), Margaery Tyrell (Natalie Dormer), and Ramsay Snow (Iwan Rheon).