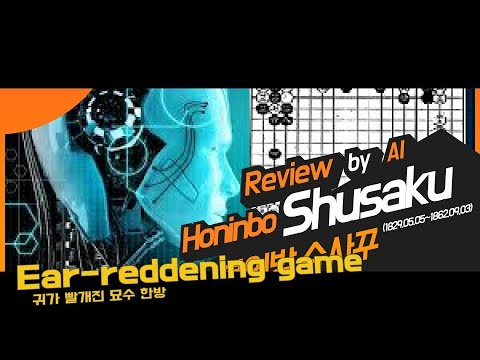 The ear-reddening game (Japanese: 耳赤の一局) is a game of go of the Edo period of Japan, played on September 11, 1846 between Honinbo Shusaku (black) and Inoue Genan Inseki (white). The game is probably Shusaku’s most notable game as it contains the “ear-reddening move”—so named when a doctor who had been watching the game took note of Genan as his ears flushed red when Shusaku played the move, indicating he had become upset.

Shusaku met Genan Inseki in July 1846 when he returned to Edo after staying in Onomichi for eighteen months. Shusaku was 17 years old and a 4-dan player at the time, while Genan was nearing his fifties and was ranked at 8-dan. The first game they played, Genan allowed Shusaku to play with a two stone handicap. Realizing he had no chance of winning, Genan suspended the game without finishing it, and played another one with Shusaku simply playing black without handicap.
Shusaku made a mistake early on in the taisha joseki, but would play well throughout the rest of the game to win by 2 points.

Shusaku (本因坊秀策, Yasuda Eisai, Kuwahara Shusaku, Invincible Shusaku, born as Kuwabara Torajiro (桑原虎次郎); May 5, 1829 – September 3, 1862) was a Japanese professional Go player from the 19th century. He is known for his undefeated streak of 19-games during the annual castle games; his thirty-game match with Ota Yuzo; the eponymous Shusaku opening; and his posthumous veneration as a “Go sage”. Next to his teacher, Hon’inbō Shūwa, he is considered to have been the strongest player from 1847/8 to his death in 1862. He was nicknamed Invincible Shusaku because of his castle games performance.

Gennan Inseki Inoue (井上幻庵因碩, Inoue Gennan Inseki, 1798–1859) was a Japanese professional go player, and head of the Inoue house from 1824–1846. He proposed a changed numbering that made him the eleventh head (rather than tenth), by including Doseki at the head of the list.
At various times he was known as Hattori Rittetsu, Inoue Ansetsu, Intetsu, Gennan Inseki, Inoue Gennan Inseki. A talented player at the highest level, but unlucky in practical terms. He was involved in one of the most famous games, the so-called Ear-reddening game against Hon’inbō Shūsaku.